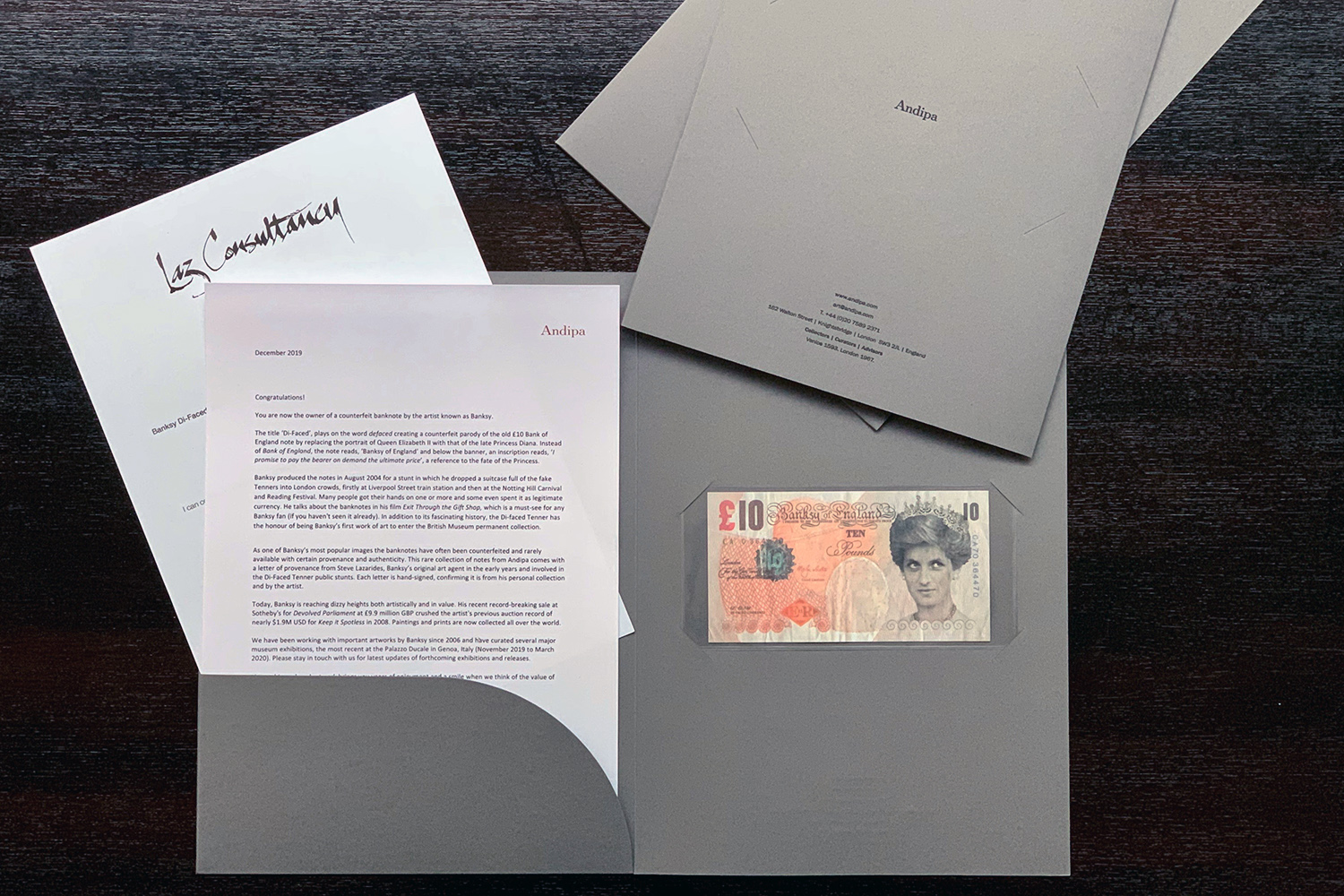 Based in the heart of Knightsbridge, Andipa has occupied their beautiful space for over 50 years. The contemporary art gallery, led by Mr. Acoris Andpa, is a leading dealer in blue chip artwork and, in particular, the works of the elusive artist Banksy.

The goal of our recent paid social campaign with Andipa was to drive sales of the artwork “Di-Faced Tenner” by Banksy through paid advertising campaigns. Recently released from the private collection of the gallery, the purchase, set inside a beautifully embossed portfolio, included the artwork itself, a letter from Andipa and a hand-signed letter of provenance from Banksy’s first art agent Steve Lazarides.

The initial objectives as discussed with the gallery were that:

Giving the reach and power that Facebook and its network hold within the social media sphere, it was decided to create targeted profiles of potential buyers based on interests, buying habits, their geographical location and job titles in order to  run dedicated adverts across Facebook and Instagram.  Ongoing discussions with the gallery revealed a strong overlap between those interested in Banksy’s artworks and other contemporary artists. Likewise, targeting potential clients through their interests in various genres and epoques of art was a key component of ensuring a targeted reach.

Historical data of existing sales and enquiries was analysed to ascertain which geographical locations would be more likely to purchase the artwork including London, Paris, Hong Kong and various cities across the United States. Areas were to be targeted for a certain time period before being changed in order to examine click through rates, impressions and sign ups and were employed as a metric to measure the effectiveness of the individual campaigns.

Copy, assets and landing pages were created for the gallery based on the individual markets that would serve to funnel sign ups into the process in a consistent manner that matched the branding of the gallery and resonate with the audiences chosen. The budget allocated reflected a cost per acquisition and cost per sale in line with the gallery’s expectations to ensure that reach was maximised and the cost would be kept low.

As the campaign developed excitement grew both from the team at TLMA and at Andipa.

The hands on approach of TLMA, with support from Andipa, allowed our team to quickly and skillfully adapt to the data that came in. During the evolution of the project the campaign shifted from pushing sign ups and launching the sale to tweaking and tailoring the messages for a general release across the various territories.

Email was employed as a multi-channel approach in order to maximise the qualified leads generated from social media. Important consideration was given to ensure that, within the email campaigns, the gallery’s content was transactional yet retained an informative and educational voice as required by a fine art gallery.

On breakdown of the campaign both Andipa and TLMA consider the project to be a great success. Key takeaways from the campaign include:

TLMA would like to thank Acoris and the team at Andipa for their input and support during the project. For more information about our luxury digital agency, our pay per click services and work, contact our teams via hello@theluxurymarketingagency.com or via +(0)7835 233607.